SQL Server EOS and the Pitfalls of Failing to Migrate 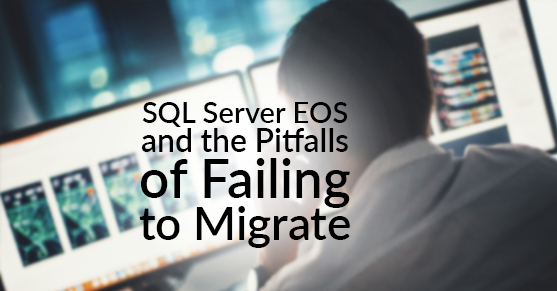 Security and compliance are two major issues facing users with service for SQL Server 2008\2008 R2 coming to an end. Once support ends, users will no longer have access to security updates to keep their system safe and maintain compliance for data protection regulations. Without critical security updates and vital support, businesses could be subject to severe interruptions, data loss, and failure to meet with industry regulations.

Without the proper security updates companies still using SQL Server 2008\2008 R2 at the end of its service life will be risking the safety of their data, revenue, and potentially their whole business. Each year, billions of data records are stolen by hackers. Now more than ever, security should be at the forefront of any database.

Along the same lines, continuing to use SQL Server 2008\2008 R2 could lead to compliance issues and failure to meet industry standards and regulations, such as PCI-DSS, HIPPA, and GLBA. A lack of security updates will lead to noncompliance, which will lead to severe business complications including penalties and fines, in some of them up to $4 million. And if your organization does any business in Europe, you need to comply with the new requirements set forth in the GDPR. Fortunately, SQL Server 2016 and up, have improved security features that are optimized for maintaining compliance with the GDPR and all major data protection regulations.

The complications and penalties of noncompliance are serious factors in running your business; continued use of the older versions of SQL Server will leave your business very vulnerable. They don’t have the strong line of defense SQL Server 2016 or SQL Server 2017 have for data identification, protection, management, and documentation. When service ends, SQL Server 2008\2008 R2 users will be defenseless against current and future threats. Their database could be subject to breaches, data at risk of loss or theft, and their business as a whole in jeopardy of noncompliance.

Migrating to SQL Server 2016 and later will not only provide extended functionality and performance but will give you the defenses you need to protect your data and your business. State-of-the-art security controls for encryption and data masking, data assessment, control of personal data use, reporting, and more are all part of the deal.

SQL Server 2016 and later have data protection and regulation woven into the software for the safety of businesses and their customers. Microsoft constantly puts out upgrades for its SQL-based technology to combat all forms of attack and data loss. Automated audits and assessments frequently check for weaknesses, and when they’re found, the system responds with a full report and how to fix the problem. It not only saves data but time and worry too.